After Jeremy Keith's wonderful reading of The History of the Web by Jay Hoffmann on this week's Shoptalk Show, Dave Rupert, reminiscing about his first experience of the Web, challenged the listeners to "go write blog posts about your Web experience". I feel like I'm overdue a blogpost, and this sounds like a nice idea, so here goes.

Back in 1997, I was at Art School, and I think it's fair to say slightly disenchanted with what the my course was offering. Maybe that's the point of Art School though. This establishment did have something going for it however - a library... with computers in it! As I recall, there was some sort of induction session required before using the library; as part of this induction we were shown a small CRT monitor displaying an interface identifying itself as AltaVista. Though I didn't comprehend it at the time, I was getting my first glimpse of a search engine, and indeed my first glimpse of the Web. 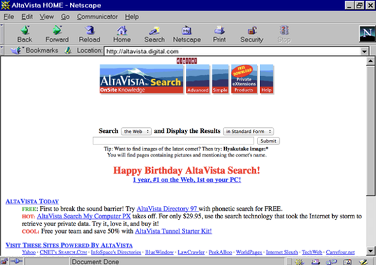 I have vague but fond memories of spending a lot of time in that library over the coming year. I'm sure this early experience of the Web would be a familiar voyage of discovery for many. New concepts entered my life; I found chatrooms, and email, and probably most influentially - personal websites. I guess what characterised a personal website back then was something that seemed to have no real purpose for existing, and clearly looked handmade (or whatever the digital equivalent to that is). It looked like regular people were building the Web. It looked like maybe I could build the Web?!

As it happened, these personal websites didn't feel like a completely new concept to me. They reminded me of something I'd seen before. When I was younger I had a Commodore Amiga. Games in those days came on floppy disks. Games in those days were also wildly pirated. There was a phenomenon where Amiga owners would create a bootable floppy disk containing lists of all the games they "own". These disks were exchanged between Amiga owners to facilitate "swapping" of games - do me a copy of this and I'll give you a copy of that. Rather than just being a utilitarian list of games however, these disks became quite creative things, with custom graphics, little biographies, and even 8bit music. They very much resembled what I would later discover as personal websites. In case you're wondering what the discovery and transfer mechanisms were, people would put their names and addresses in personal ads in the back of computer magazines. It was the large scale piracy of its day, facilitated by the leading computer magazines. It was a strange time. Anyway, the Amiga swap disk thing was fun and exciting; and years later, in 1997 I was getting a similar feeling from the Web.

With the excitement of a child engaged in a not so underground piracy ring, I began my two decade plus adventure into making Web pages. It must have been around this time that I actually started to use the library (the Web) for educational purposes. I learned that all I needed to make a webpage was Notepad (an application ubiquitously installed on Windows PCs, including those in the Art School Library), and somewhere online to put the files - a webhost. Geocities was the place to host websites at that time. If you know Geocites, then it probably evokes memories of the sort of sites I was visiting and building. 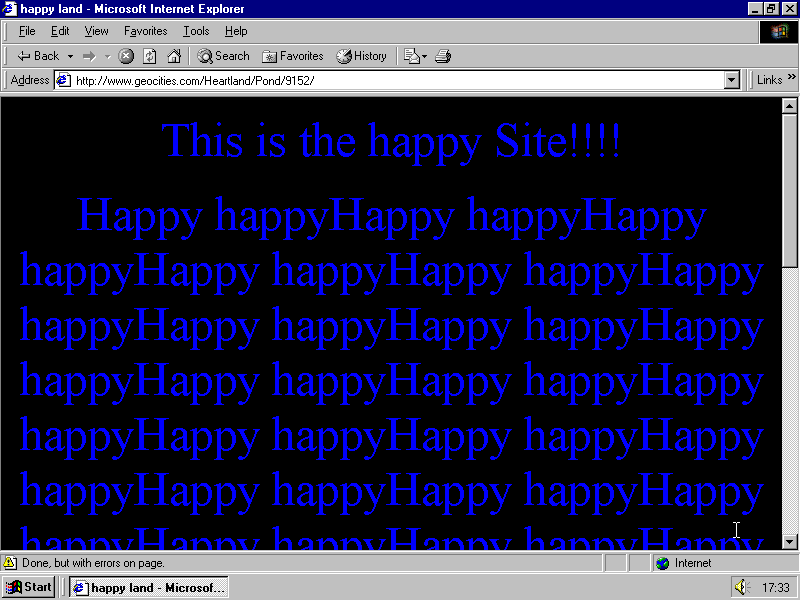 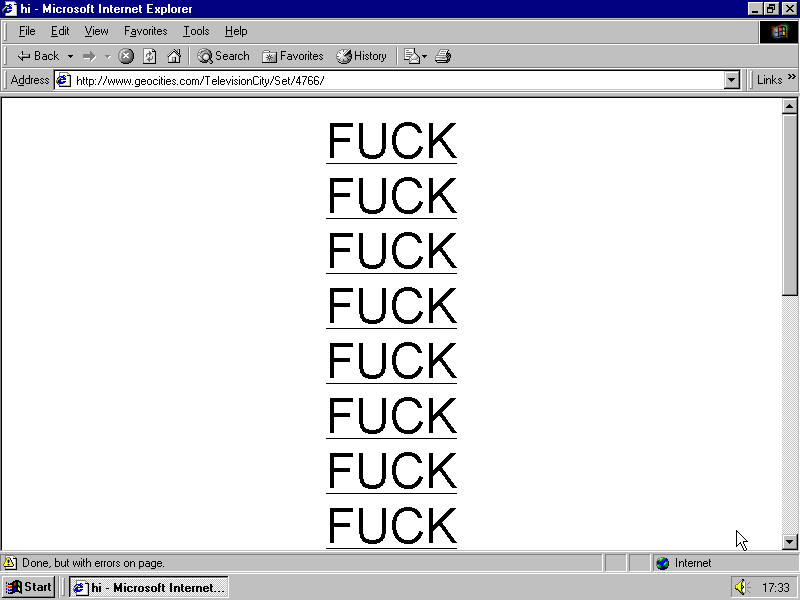 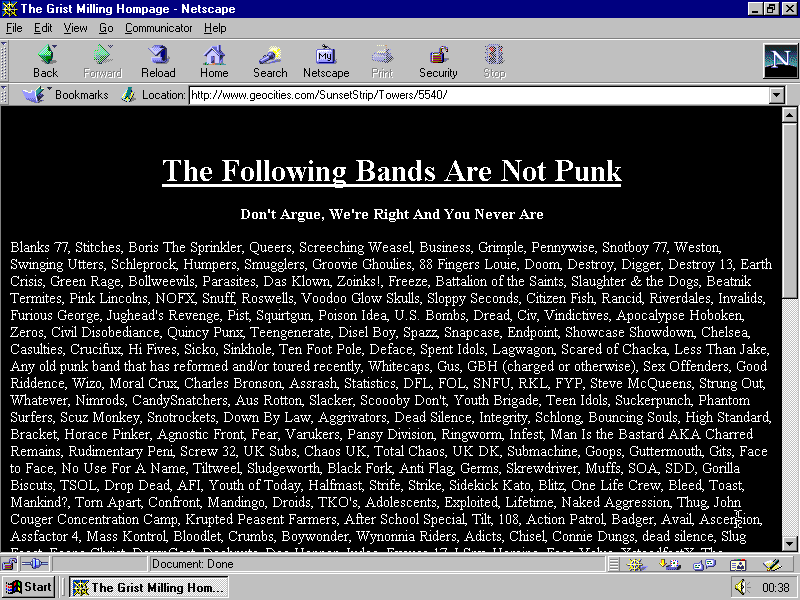 Unfortunately I don't have anything I made at that time. The earliest of my websites I was able to find was one called "Preparing for Zombies", which I made in the early 2000s. That site was a spoof of a UK Government campaign of the time. If there's demand, maybe I'll upload it somewhere...

By this time I had used a student loan to buy my own computer, and was now online at home. It was in this period that I had my first taste of social media. The Web still felt weird and fun, and MySpace in many ways felt akin to those early personal websites. The DIY spirit of Geocities lived on here, if only at an aesthetic level. MySpace allowed you to customise your profile with your own HTML and CSS. This feels like such a strange idea now, but it happened, and people loved it.

Somewhere along the line I started to get serious about design, and in 2005 came my first design job. It was at a small marketing agency, where I was mostly designing for print. It was my passion for the Web of course, that got me to this point; and I'm not sure I would have become a designer without first becoming a Web maker. While I'm reflecting on how I came to enjoy the career I have, I want to make a serious point. I owe this career to two things that I have touched upon already, that deserve reiteration. One is free access to a library (via free access to education), and the other is the low barrier to entry of coding a webpage. I mention these again, and together because I feel they are both are under threat. Certainly in the UK, education has become increasingly expensive; and libraries have been closing en masse under the weight of austerity policies brought in after the banking crisis of 2008. In terms of barrier to entry, when I started out, the way to make a webpage was to open a text editor and type a few HTML tags. While that is as true today as it was 23 years ago, the normalisation of overengineering in frontend development makes me wonder if some people, perhaps groups of people, are being deterred from getting involved.

Back to the story, it's 2005, I'm now a professional Web / Graphic Designer. What does any self respecting Web Designer need? A portfolio site. I'm not sure if this was my first domain purchase, but it's the earliest survivor. There was much less choice of TLDs back then, so samsmith.name was born. That site has had lots of little iterations over the years, but still serves the same purpose today. Something else was born around then - a love affair with domain names. Something I came to appreciate was that to really have ownership of your bits of the Web, you need at least one domain to call your own. Just a few months after samsmith.name came elisted.org. This was to be home to a website directory. It was a lofty ambition, to build a site of sites; but that wasn't quite as crazy as it now sounds. Website directories were a thing back then. Again elisted.org is still online today, albeit with the much more modest scope of listing a few sites that I find useful.

As social media continued to grow in popularity, Facebook was unleashed onto the world. I was a late adopter as I recall, resisting the switch from MySpace. I eventually followed the crowd and switched in around 2007. As with MySpace, there was a focus on people having a page on the Web, and the concept of "friends". I can't remember much of what set Facebook apart, but I do remember it feeling new. One small gimmick it had was the "status". This was essentially the cornerstone of social media, the thing you write. Here though that thing had to start with "

Sam is looking forward to seeing Misfits on Sunday

Sam is wondering why

Sam is questioning the sambuca on a week night

In 2012 the Web gave me perhaps its biggest gift yet, remote working. Working from home has its positives and negatives, as I'm sure many people have been learning in 2020. The biggest negative for me is ironically the reason why working from home has now been so widely adopted - its tendency towards isolation. This is perhaps a tendency of the Web more broadly. The positives on the other hand are a freedom and flexibility that can enhance and transform your quality of life. For me this meant, after living in one small town up to this point, I moved to three of my favourite cities. I don't know if this qualifies me as what I believe the kids call a "digital nomad".

Meanwhile, somewhere along the line, the Web had gotten very business like. Social media had lost any connection to the creativity, self expression, and weirdness that came before. Google had decided that not being evil wasn't good for their bottom line. The Web was starting to leave a bad taste in my mouth. It must have been about 2015 when I started my first Web boycott. I set about removing Google from my life. We were still in the fallout of the Snowden revelations, so this idea was very much in the air. It wasn't privacy concerns that lead me to take this action though. I was already somewhat of a grudging Google user at this point; the Google backlash simply made me reflect on what an absurdly big undertaking it seemed to stop using Google products. At the end of the day, it was the monopoly that irked me most. I started to wonder what the experience of degoogling my life would be like, so decided to find out. I have to admit that I have yet to complete this task, as I still have a functioning Android phone. So far though, it has been a wholly positive experience, not only do I feel better about the products I use, but almost across the board it has lead to me finding generally better products and services. If you are interested, I have started a list of my favourite Google and Facebook alternatives (the domain buying habit continues).

Avoiding the big tech players got me (back) into an indie mindset when it comes to the Web. This inevitably lead me to the IndieWeb movement. While I have yet to be directly involved in the IndieWeb community, I have been inspired by their ideas and principles. These principles, based around the idea of personal websites, seem geared towards building a Web more like the one I fell in love with. That in turn leads me to today, and the website you are (probably) reading this on. This site has been, and continues to be an attempt to rekindle a little bit of the magic of the early personal websites; as well as incorporate some of the forward thinking IndieWeb ideas, such as Webmentions. Stepping back from it for the first time I can see that I have a long way to go. I could certainly crank up the whimsy. In the words of Sara Vieira, "We need to make dumb shit! Make useless stuff; make the web fun again!"